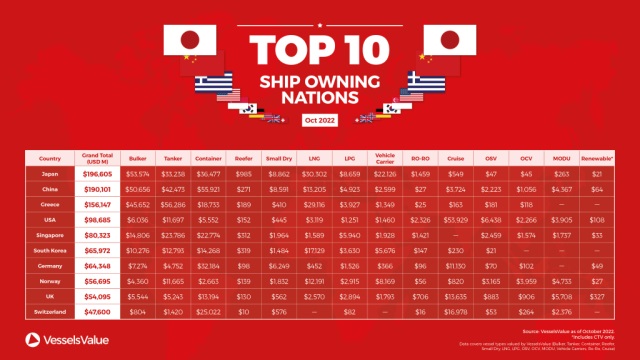 In terms of fleet value, Japan has moved back up to 1st after falling to 2nd last year, currently owning a total of USD 196.6 bn in assets. This is an increase of c. USD 9 bn year on year and is largely due to the current boom in the LNG sector.

Rate levels have been stratospheric this year for the LNG sector, with earnings at an all time high of USD 441,385 USD/Day in October, bringing up values for the entire fleet.  This has also sparked an ordering spree across the LNG sector and a total of 142 new orders have been placed so far this year, an increase of c.92% year on year. Of these orders, around a quarter were placed by Japanese companies including MOL, NYK and Meiji Shipping.

China has retained 1st place this year in terms of number of vessels owned, with a total of 6,908 vessels and a current fleet value of USD 190.1 bn. China owns the largest Container fleet both in terms of vessels and values. The unprecedented increase in rates seen over the last two years has boosted the value of the fleet from c. USD 28 bn at the start of 2021 to c. USD 56 bn today,

China also owns the largest number of Tankers. Consequently, the recent surge in rates and values has moved China up the ranks to 2nd place in terms of fleet value, up by USD 15 bn from last year to USD 42.5 bn. Tanker rates have surged since the beginning of 2022 with the TD3C-TCE Middle East Gulf to China, increasing from 14,966 USD/Day to a peak of 78,876 USD/Day in October. The surge in rates has also prompted interest in sale and purchase activity; a total of 950 secondhand sales have been recorded so far this year, an increase of c.10% year on year. 15% of these sales were made by Chinese companies including CMB, Cosco and ICBC.

Greece has retained its 3rd place spot both for total number of vessels by fleet and by value. However for Tankers, Greece has been knocked off the top spot for the number of vessels by China, with 1,466 vessels compared to 1,461 from Greece but in terms of value, Greece ranks highest with a fleet value of USD 56.2 bn. Improved earnings have sparked renewed interest in this sector, with VLCC earnings peaked at 72,199 USD/Day, the highest levels seen in over two years. This is primarily due to improved demand, alongside the impact of the ongoing conflict between Russia and Ukraine. Values have increased by 14% to 86% across VLCCs, Suezmaxes and Aframaxes since the start of the year.

Greece is also the owner of the second most valuable LNG fleet worth USD 29.1 bn. With current spot rates soaring, this has brought up the value of the fleet by over 50% from the start of the year, with an increase in value of c. USD 10 bn from last year.

The USA has remained in 4th place with a total of USD 98.6 bn in assets, up over USD 2 bn from last year.

Of the total value in assets, USD 54 bn comprised of Cruise ships. This comes with no surprise as the largest Cruise companies, Carnival and Royal Caribbean, are both based in the USA. Over the last few years, this industry has been severely affected by the Covid-19 pandemic. The USA still retains its position as the largest global Cruise owner, despite their fleet value decreasing by a total of USD 2.5 bn since last year.

The USA is also a prominent owner in the RoRo sector, with the largest fleet in terms of value with a fleet worth USD 2.3 bn. However, with 38 vessels, the USA comes second to Japan who own 82 vessels.

Singapore has retained 5th place this year with a fleet value of c. USD 80.3 bn and 4th place in terms of number of vessels. Singapore’s Container fleet is the 5th largest globally with a value of USD 23 bn, accounting for over one quarter of the value of the entire fleet.

Since the beginning of the year, Singapore’s investment in the Container sector has followed the global surge, and a total of 49 newbuilding orders have been placed, up 63% year on year. Companies such as PIL, Eastern Pacific and Ocean Network Express have sought to capitalise on the roaring freight market, with newbuilding orders placed largely in Post Panamax and New Panamax sectors.

In secondhand tonnage, improvements in the Tanker sector have sparked increased sale & purchase activity for Singapore, and the current Tanker fleet is valued at c. USD 23.7 bn, up USD 5.5 bn year on year.

South Korea has moved up to 6th place this year, overtaking Germany. The value of their fleet now stands at USD 65.9 bn, an increase of almost USD 8 bn year on year.

South Korea’s investment in the LNG sector continues to pay off, with values for such vessels increasing by as much as c. 19% since January. Over the first ten months of this year, 28 newbuilding orders have been placed by South Korean companies such as K3 Consortium, H Line Shipping and SK Shipping. All of the orders were for large LNG carriers of 174,000 CBM.

South Korea has maintained a key position as a global seaborne car exporter. Leading shipowner and operator Glovis have expanded the PCTC fleet in recent years, while Eurokor has 20% of shares owned by Hyundai Glovis and Kia Motors. The high volume of car manufacturing and seaborne exports makes South Korea the third largest owner of Vehicle Carriers.

Germany has fallen to 7th place with a total fleet value of USD 64.3 bn. A large part of their fleet has always comprised of Containers, and at the moment Germany is ranked 2nd by number of vessels. As earnings have corrected, following the boom earlier this year from record highs of 148,500 USD/Day for Post Panamax vessels in Q2 and Q3, earnings have now dropped to 71,500 USD/Day. As such, Germany’s fleet has declined in value by USD 12.8 bn year on year. This year, Germany’s investment in the Small Dry fleet has increased in value by USD 1.3 bn year on year to stand at USD 6,249 bn.

Norway has moved up two places since this time last year, with a total fleet value of USD 56.7 bn. This is mostly driven by investment in the Small Dry sector from companies such as Wilson ASA, Sole Shipping and Oslo Bulk. Sale and purchase transactions for this sector have increased by c.39% year on year.

This year, Wilson have acquired a number of Small Dry vessels that went from a Time Charter basis to being owned by Wilson, as part of an agreement with Arkon Shipping to secure the tonnage long term in a strong market.

Norway is also the 2nd largest owner of Vehicle Carriers, both by value and number of vessels. The current value of this fleet stands at USD 8 bn, up USD 4 bn from last year.

The UK has fallen to 9th place, despite the value of their fleet retaining its value at USD 54 bn. In the previous year, the UK fleet had increased in value by 38% due to strong gains in the Bulker and Container markets. Both sectors have seen much more modest returns as of late, and this has had an impact on values. The value of the UK Container fleet has fallen by 27% year on year to USD 13.1 bn, while the Bulker fleet has remained the same at around USD 5.5 bn.

Switzerland has moved up to 10th place and now features in the Top 10 Ship Owning Nations, when historically it had not ranked. It has a total fleet value of USD 54 bn, with the 4th largest Container fleet both in terms of value, at USD 25 bn and based on the number of vessels, with 431 vessels trading. This year, Switzerland has been the top buyer of Container vessels globally, with MSC acquiring 78 vessels. The Swiss based owner went on a buying spree, in order to capitalise in from the surge in demand and record breaking rates that this sector has experienced over the last few years.

ZERO CARBON OUTLOOK – REPORT
14 junio, 2022
Share This
AskISES
Do you need help?
If you have any questions about the Marine Engineering Industry or have a specific requirement, please click here and the ISES Secretariat will respond soonest.