The International Radiotelephony Spelling Alphabet, commonly known as the NATO phonetic alphabet or the ICAO phonetic alphabet, is the most widely used radiotelephone spelling alphabet and was developed by the International Civil Aviation Organization (ICAO), to ease communication via radio or telephone. Spelling alphabet is a set of words used to stand for the letters of an alphabet in oral communication.

How is it used?

The NATO Phonetic Alphabet substitutes a code word acrophonically for each letter of the English alphabet, so that letters and numbers would have distinct names that would be most easily understood by those who exchange voice messages, regardless of language/ pronunciation differences or the quality of the communication channel.

The alphabet is used to spell parts of a message containing letters and numbers to avoid confusion, because many letters sound similar, such as «n» and «m» or «f» and «s».

Note that “Alpha” is written as “Alfa” and “Juliet” is written as “Juliett”, which are the spellings still in use in the international version of the alphabet, to avoid possible critical mispronunciations by speakers of other languages. 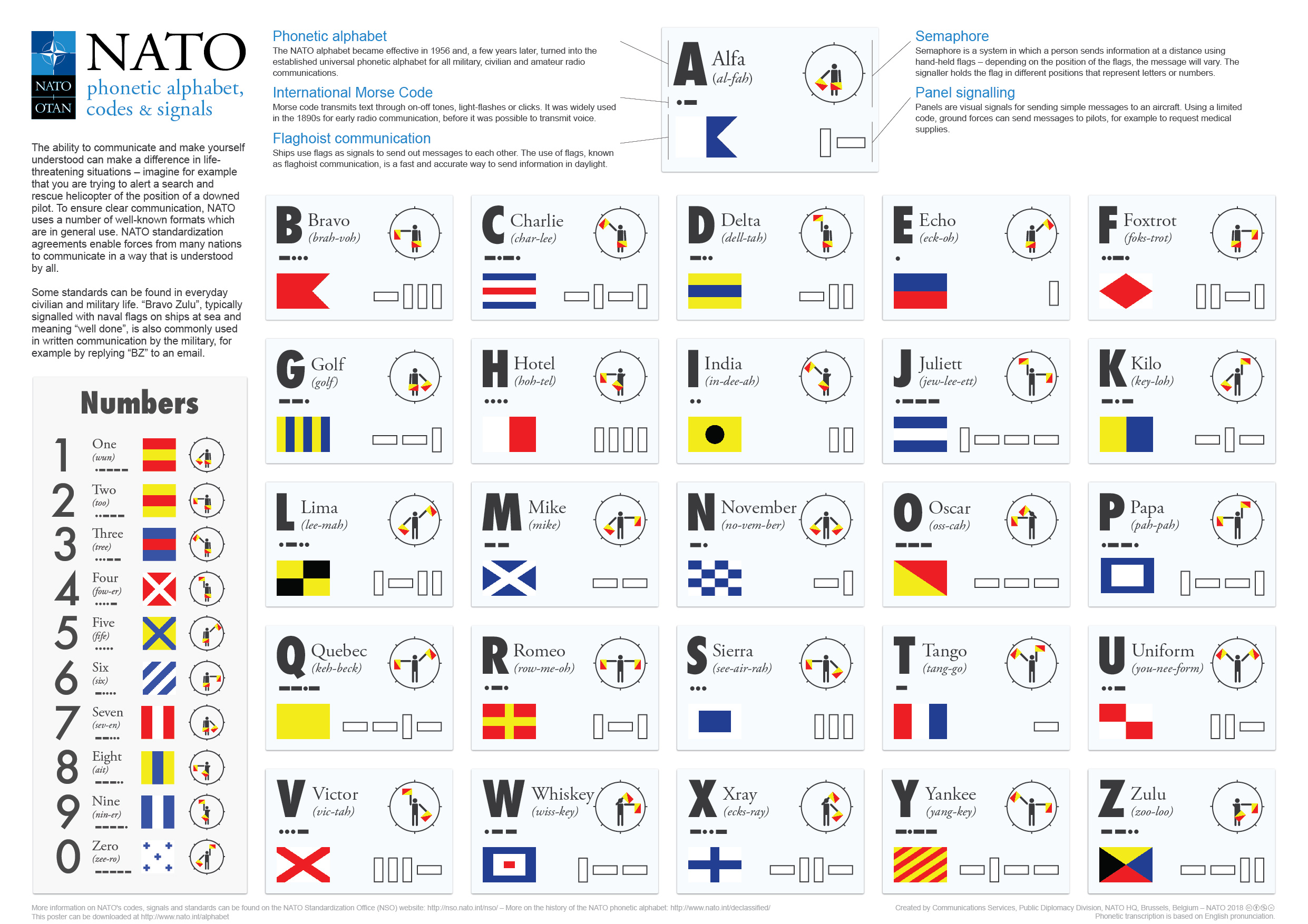 After ICAO developed the phonetic, this was adopted by many other international and national organizations, including the IMO. However, each agency chooses one of two different sets of numeric code words. The IMO defines different pronunciation of numerals than does the ICAO:

In practice, these are used rarely, as they frequently result in confusion between speakers of different languages. Actually, as of 2002, the IMO’s GMDSS procedures permit the use of the ICAO numeral pronunciation.

A glance of history

Telephone spelling alphabets were developed to improve communication since World War I, but the first non-military internationally recognized spelling alphabet was adopted by the CCIR (predecessor of the ITU) in 1927.

During World War II, many nations used their own versions of a spelling alphabet, but the International Air Transport Association (IATA), recognizing the need for a single universal alphabet, presented a draft alphabet to the ICAO during 1947 that had sounds common to English, French, Spanish and Portuguese.

During 1948-1949, Jean-Paul Vinay, a professor of linguistics at the Université de Montréal, collaborated with the ICAO on the development of a new spelling alphabet, with minimum requirements for the words to have a similar spelling in at least English, French, and Spanish, as well as be live words in each of these three languages.

Eventually, the NATO alphabet became effective in 1956 and, a few years later, turned into the established universal phonetic alphabet for all military, civilian and amateur radio communications.

The name NATO phonetic alphabet became widespread because it was NATO Allies who had spearheaded the final revision and because the signals used to facilitate the naval communications and tactics of the US and NATO have become global.

Apart from the traditional military usage, the NATO phonetic is often used in the retail industry, where customer or site details are spoken by telephone (to authorize a credit agreement or confirm stock codes), by IT professionals to communicate long codes or by airlines to communicate passenger name records internally.

A spelling alphabet is also often called a ‘phonetic alphabet’, but this is not related to the usage of the same phrase in phonetics, which is used to indicate the sounds of human speech, such as the International Phonetic Alphabet.