While I was working on my recent article on dry bulk shipping enterprise Golden Ocean Group (GOGL), it occurred to me that many readers might like to see an analysis of the industry itself to support some of the claims being made by Golden Ocean and Ship Finance International (SFL). Basically, both of these companies have been claiming that the dry bulk shipping industry has been showing signs of recovery, which has been having positive effects on shipping freight rates. This should by extension have a positive effect on the revenues and profits of those companies participating in the industry. It does indeed appear that a recovery in the industry is underway, which will be shown in this article.

About The Dry Bulk Shipping Industry

A bulk carrier is a seagoing vessel that is specially designed to transport unpackaged bulk cargo such as grains, coal, ore, and cement in its cargo holds. A dry bulk shipping company such as Golden Ocean Group simply owns a fleet of these ships that it then uses to transport bulk cargo for a customer in exchange for money. As these shipping firms effect the transport of large quantities of these goods across the oceans and between different companies, they are critical to international trade.

There are two primary ways in which dry bulk shippers are compensated for the use of their ships: time charter rate and voyage rate. A time charter is when a customer will reserve the ship for the transport of its cargo for an extended period of time at a specified rate per day. This is useful for those customers that need to transport cargo constantly and desire protection for the constantly changing pricing environment in the spot market. Conversely, voyage charter rate, also known as spot rate, is where a customer will hire a ship to make a single trip, carrying bulk cargo from its source to its destination. This is a good method for a customer to use if it has a one-off shipment but in most cases time charter is the way to go if a company is a frequent shipper.

As I mentioned in my article on Golden Ocean Group (linked above), the company did see its average time charter rates decline quarter-over-quarter from the fourth quarter to the first quarter of 2018. With that said though, rates were broadly higher than in the first quarter of last year:

As shown here, Capesize vessels saw by far the steepest quarter-over-quarter decline in rates. The other classes ship saw their rates hold up much better. Capesize ships are far larger than both of the other two classes. In fact, Capesize ships are so large that they cannot traverse the Panama Canal and must travel the whole way around Cape Horn to cross between the Atlantic and Pacific Oceans. Due to this limitation, these ships are generally only used for carrying heavy cargoes that are not time-sensitive such as coal or iron ore. Therefore, we may be able to conclude that this price drop was caused by a reduction in the volume of these shipments. However, that does not appear to be the case for coal: 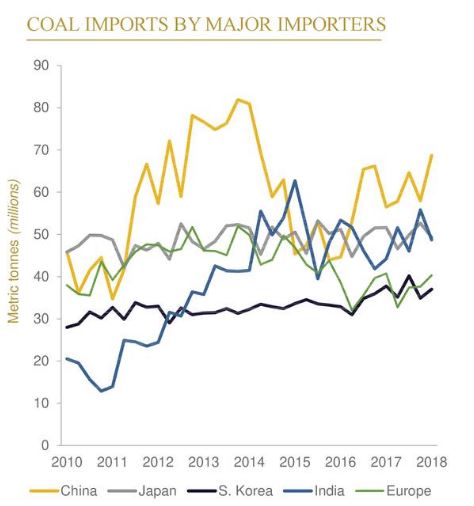 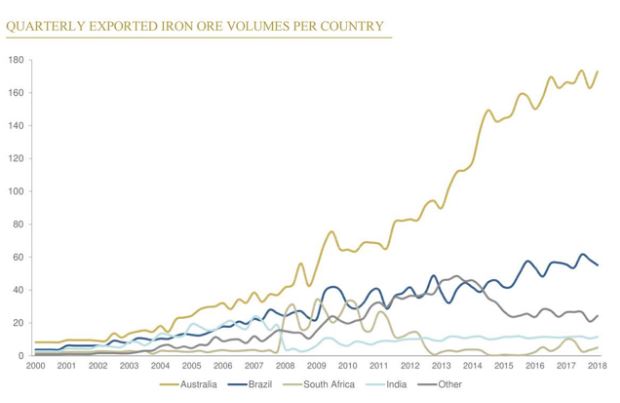 While iron ore shipments from Brazil may have fallen slightly in the first quarter from the fourth, for the most part shipments were higher quarter-over-quarter and relatively flat year-over-year. So it does not appear that a decrease in demand for iron ore shipping services was the cause of the decline in Capesize charter rate pricing in the most recent quarter.

So what was the cause? Well, one answer could be that the number of Capesize ships in the global fleet increased from the fourth quarter. For example, Golden Ocean Group alone took delivery of five newbuild Capesize vessels during the first quarter. When we consider that there has been virtually no scrapping activity across the global fleet, these deliveries will increase the supply of ships and cause charter rates to decline, all else being equal. Fortunately though, the global fleet is not expected to grow much either in 2018 or in the next few years, as shown here: 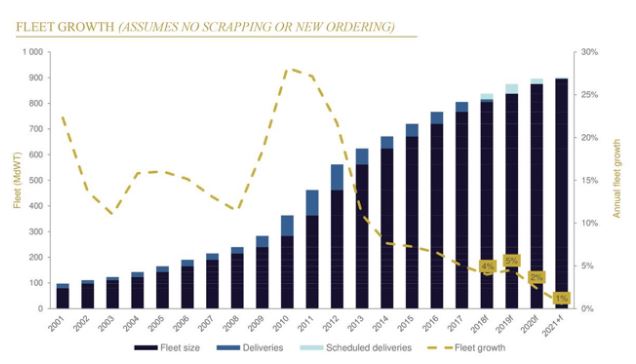 Although supply growth is expected to be very low going forward, it will still exert a negative impact on pricing in the absence of a rise in shipping volumes, which is something that we should keep an eye on going forward. This could be particularly relevant given the current political climate in the United States, which appears to favor tariffs on imported goods.

We have been seeing some signs that the industry’s customers have been responding to the tariffs, which is admittedly quite expected. Many of the nations around the world that have imposed retaliatory tariffs against the United States have specifically targeted agricultural products. As we can see here, exports of both grain and soybeans surged during the first quarter in an attempt to ship as much product as possible before the bulk of these tariffs take effect. 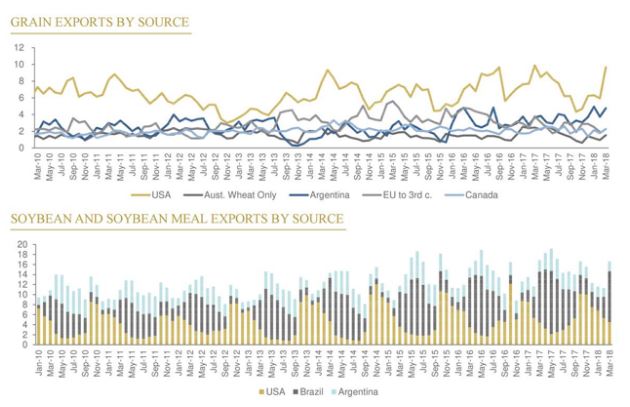 My expectation is that these two commodities will see their transported volumes decline in the coming quarters as the new tariffs around the world take full effect. Thus, the first quarter surge is most likely a one-off event. Nevertheless, shipping companies can benefit from the extra business while it lasts.

Overall, global trade volumes are up, barring some weakness late in the first quarter. This weakness is seasonal however and so does not appear to be anything to worry about. The industry does appear to be quite stable right now, but the growing trade disputes around the world are certainly going to prove to be a wildcard over the next few quarters. This is unfortunate as international trade volumes will need to continue to grow going forward in order to absorb even the mild expected fleet growth in the coming years. Investors would be wise to keep an eye on these trends going forward.