The collision of a container ship with a U.S. Navy destroyer off the coast off Japan last weekend has highlighted the fact that the open waters can be pretty busy places. Most internationally traded goods are transported on container ships and the total number of active vessels stands at close to 6000 worldwide, according data provided by shipping information portal Alphaliner. That fleet can move close to 21 million standard containers (TEU).

As the infographic below shows, the biggest container shipping company by number of chartered and owned ships in its fleet is headquartered in the small European country of Denmark. APM-Maersk has currently 636 ships in service. The second largest fleet is run by the Mediterranean Shipping Company (MSC) which was founded in Naples in Italy, but is now headquartered in Geneva in landlocked Switzerland. 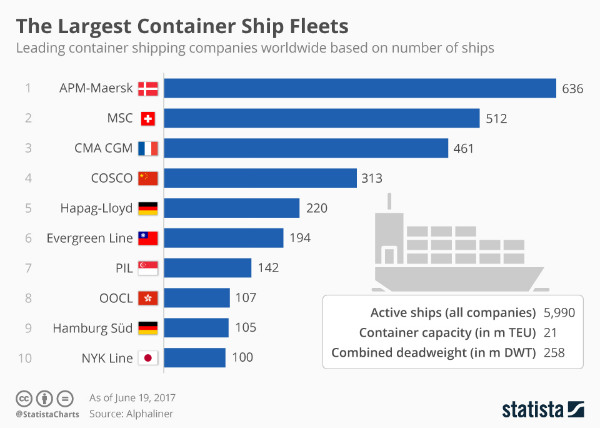