The global economy started in 2018 on a positive note but, as industrial production decelerated, trade slowed and business confidence fell, the momentum lost steam.

Global trade growth decreased over the course of 2018 in volume terms, from 5.3% in 2017 to 3.8%. One reason behind this loss of momentum is the rise in global trade tensions.

Some 27 cases were brought to the World Trade Organization (WTO) Dispute Settlement Mechanism (DSM), while the total number of active trade disputes has steadily been increasing in recent years. 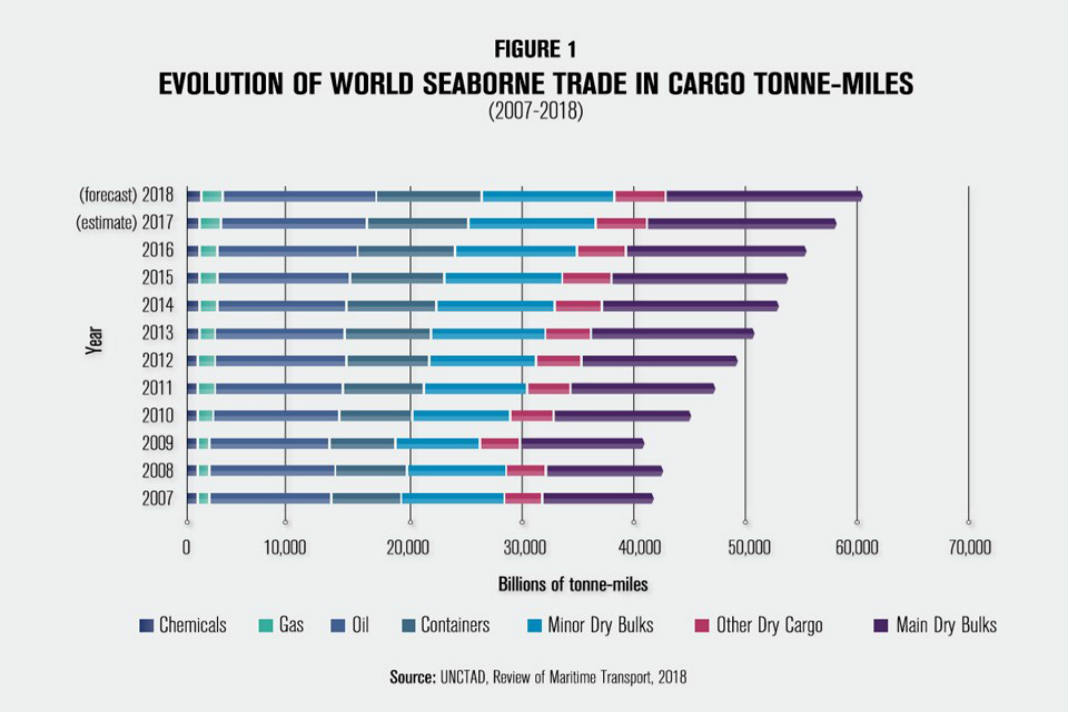 Tensions are exacerbated by the implementation of tariffs by major economies – especially the United States (U.S.) of America – and retaliatory measures taken by others, including China. 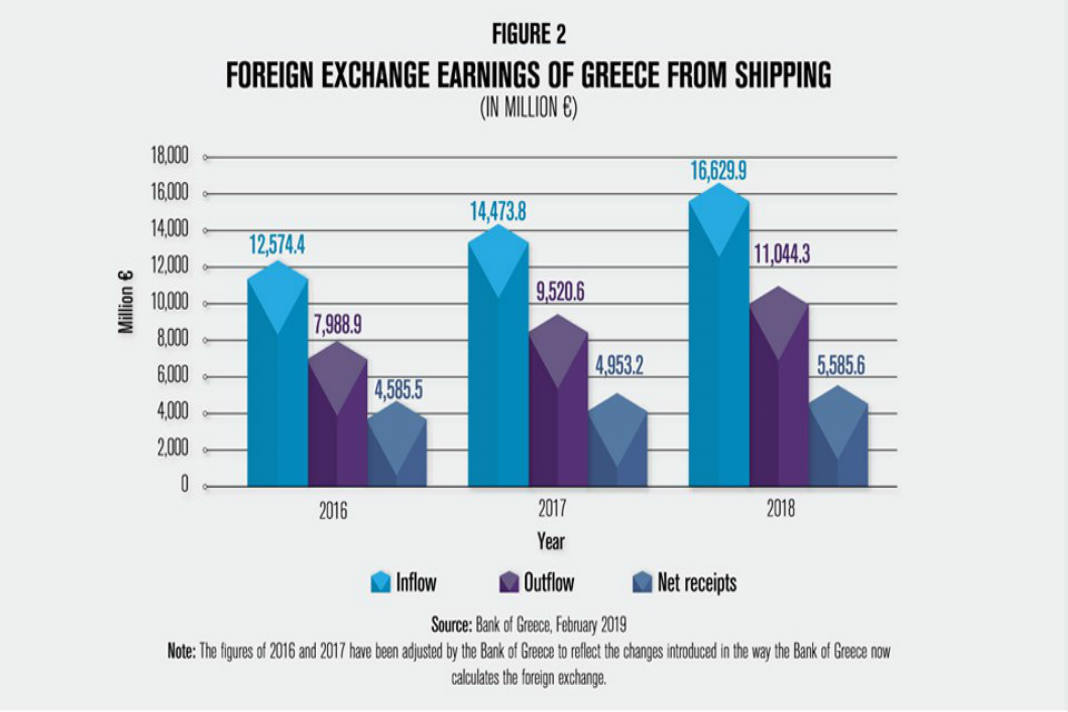 Seaborne trade around the World

Contingent on continued economic conditions in the global economy, activity in all segments of the shipping industry will continue to be marked by uncertainty, despite more positive projections for liquid and dry bulk commodity trades. 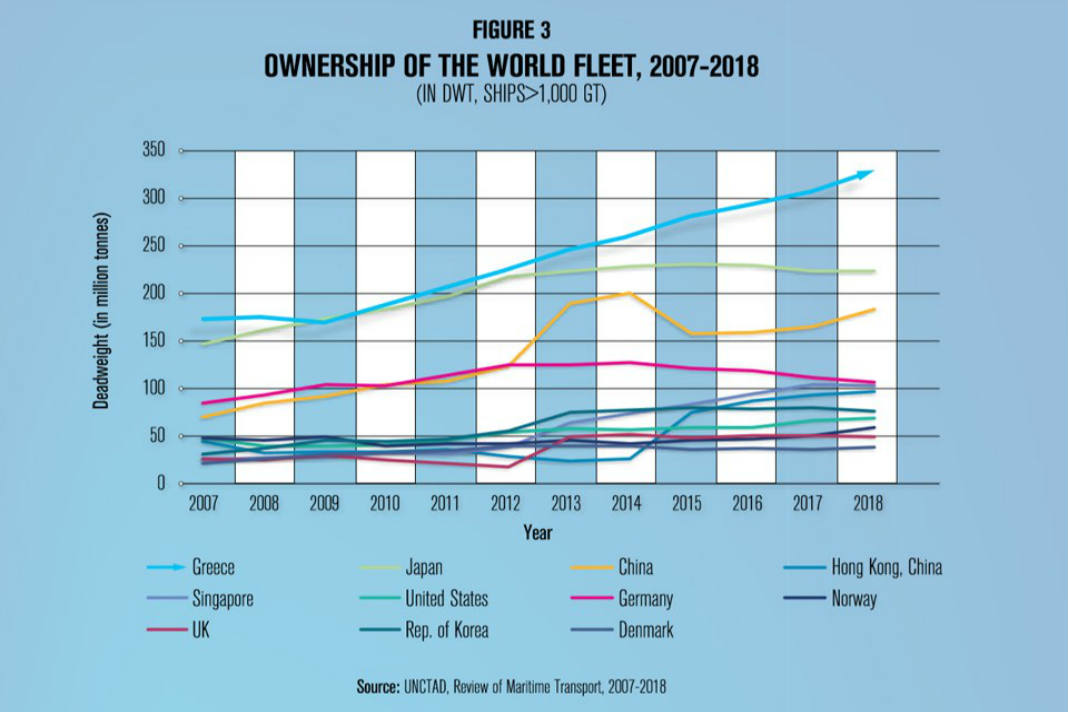 Global fleet growth in 2018 is estimated at about 1.5% compared to 2017. While dry bulk commodities are projected to experience a compound annual growth rate of 4.9% between 2018 and 2023, the decrease of Chinese seaborne imports represents a challenging situation for several segments of the industry.

In the dry bulk market, the shifting interest of Chinese steel mills from imported iron ore towards scrap metal is a major turning point. The trade war between the U.S. and its main trading partners, mainly China, casts further uncertainty in the agri-bulks segment. 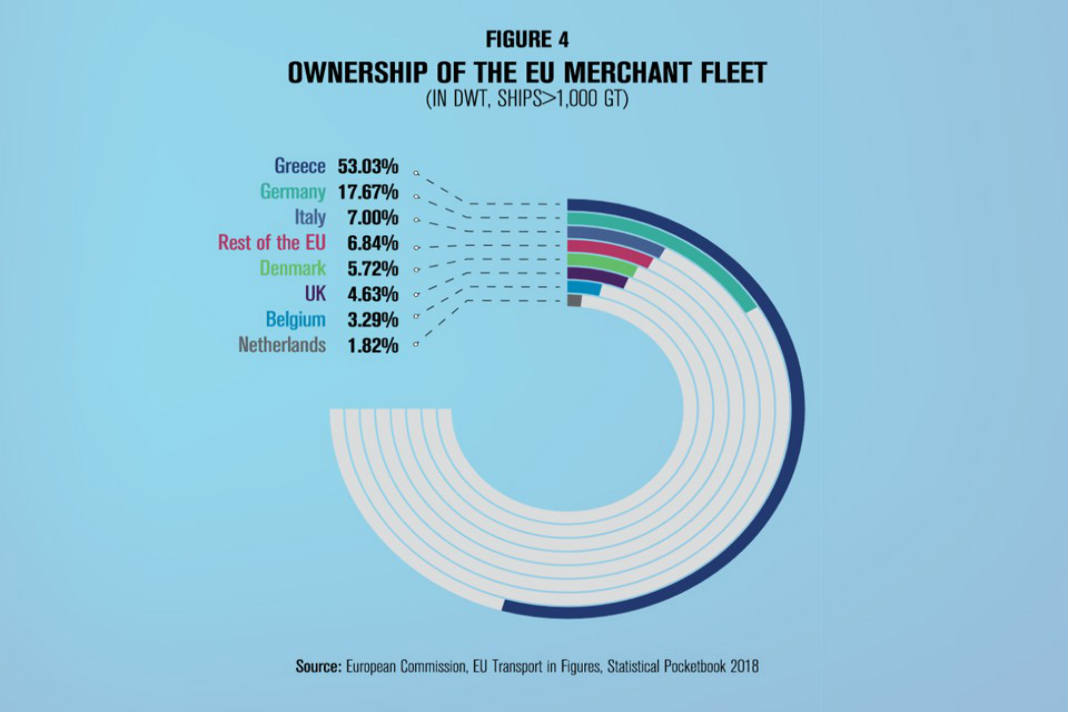 Despite an overall healthy global oil demand, 2018 has been a very difficult year for oil tankers, with crude-oil tanker operators being particularly affected. After three years of profits, freight rates and fleet utilisation rates fell to record low levels due to an excess in supply.

The U.S. sanctions on Iran have contributed to the severity of the situation. Tanker trade volumes are projected to increase, although at a slightly slower pace. For the tanker market to truly improve however, a lot will depend on demolition activity in 2019.

The continued inflow of very large containerships in the Far East to Europe trade lane pushed freight rates down. This gloomier economic outlook is compounded by rising protectionism, which adds another level of unpredictability to the container market. 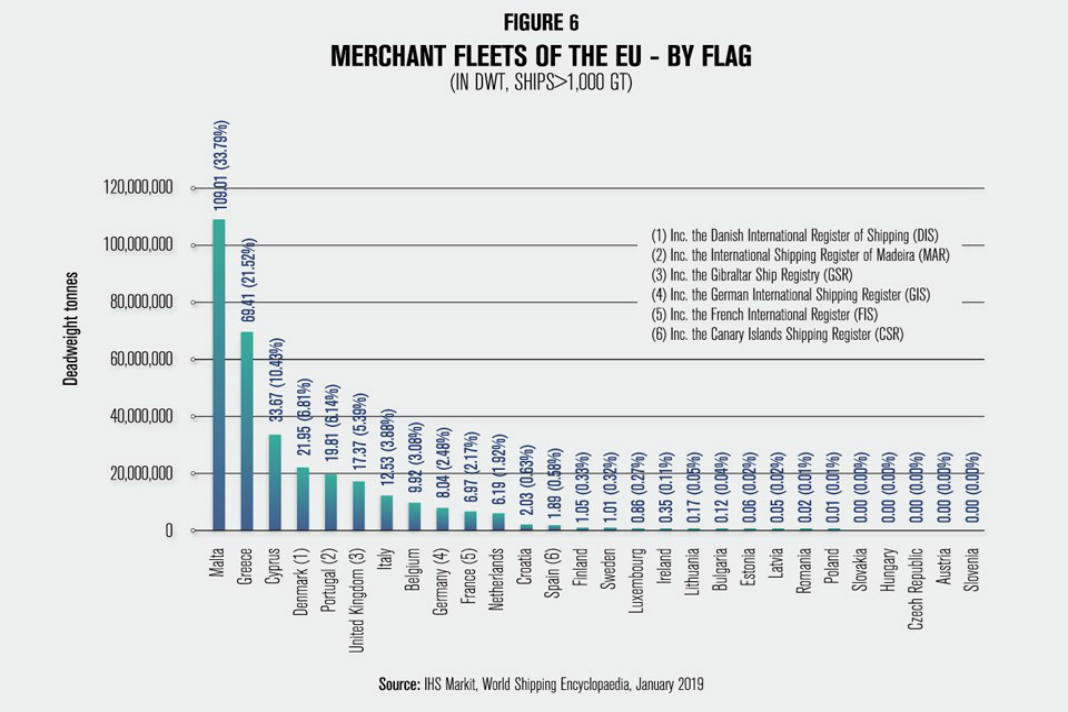 In 2018, Greece exited its European Stability Mechanism programme and some limited economic growth took hold, though significant vulnerabilities remain. Exports in 2018 grew by 15.7% to €33,417.9 million.

Industrial production picked up between 2015-2017, reaching a 4.5% growth rate in 2017 but slowed down again to 1% in 2018. Confidence indicators have somewhat improved, with wages rising and private consumption slowly growing after prolonged stagnation. Nevertheless, unemployment and spare capacity remain high. 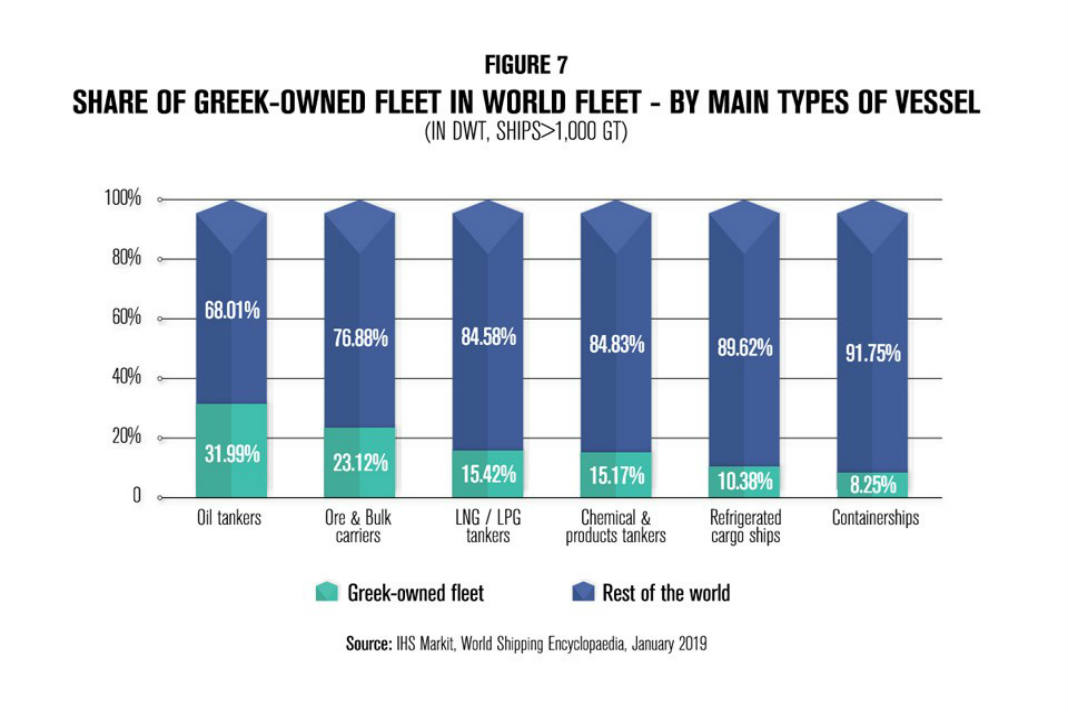 Despite an economic landscape offering few investment incentives, the receipts in the Services Balance of Payments from maritime transport are estimated at approximately €16,629 million for 2018. That is 14.89% more in relation to 2017 when the receipts were €14,473.

The contribution of Greek shipping to the country is as important as it is diverse, going beyond the receipts in the Services Balance of Payments from maritime transport services.

It ranges from indirect economic investments, to employment opportunities and to raising the profile of the country internationally by being an essential and strategic trade partner of major economic and political forces, with 22.5% and 20.3% of the Greek-owned fleet’s activity being dedicated to the U.S. and the European trade respectively and with the greatest share of the Greek-owned fleet’s activity, i.e. 31.8%, taking place in Asia serving the fast growing Asian economies.

The numbers are indeed impressive; while Greece represents only 0.15% of the world population, Greek-owned ships represent almost 21% of the global tonnage. 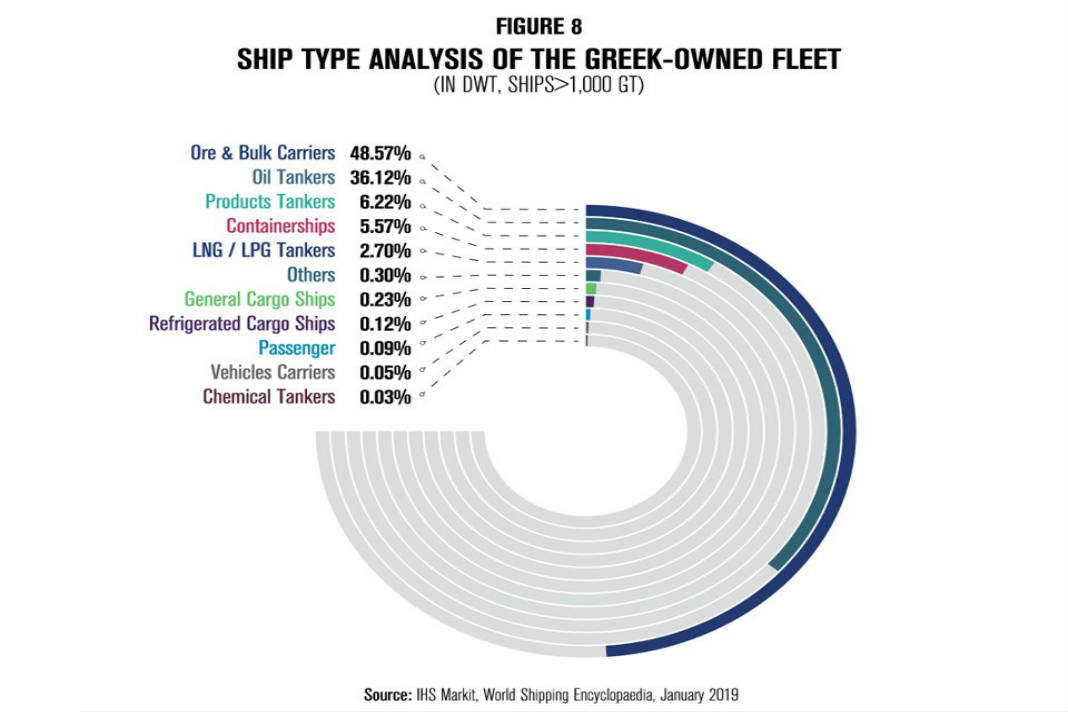 Greek shipowners more than doubled the carrying capacity of their fleet between 2007 and 2018. The Greek-owned fleet represents 53% of the European Union (EU) fleet in dwt and 20.9% of the world fleet in dwt.

As such, Greek shipping’s strategic role in serving global trade and especially in securing the extra-EU trade, including its energy supplies, is clearly manifested.

More specifically, the EU imports 87% of its crude oil needs, 70% of its natural gas needs and 40% of its solid fossil fuels needs.

With the energy security concerns on the rise, the Greek-owned fleet plays a crucial role in securing EU’s diverse energy imports from remote regions of the world.

Greek shipping’s strategic importance becomes also obvious in light of the fact that the EU relies on international shipping for more than 75.5% of its external trade.

The Greek Register accounts for 720 vessels (over 1,000 gt) amounting to 39.61 million gt. The Greek-flagged fleet ranks 8th internationally and second in the EU (in terms of dwt). 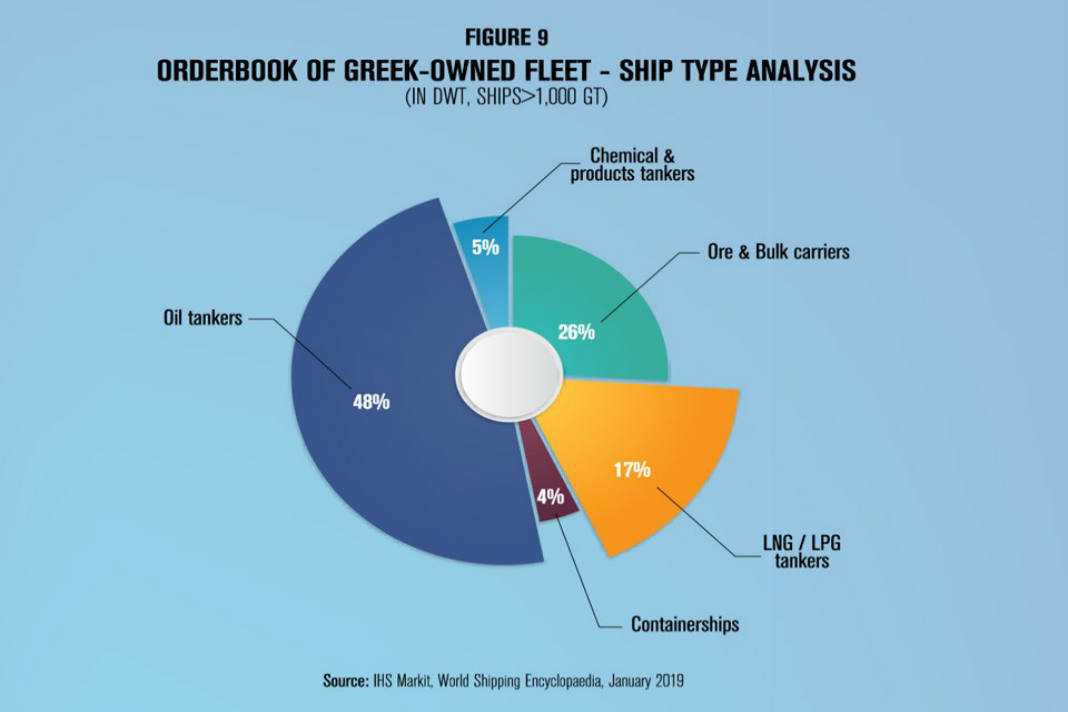 Greek shipping is primarily involved in bulk / tramp shipping, which is an example of a sector with characteristics of perfect competition.

Being served by entrepreneurs who mainly own small and medium-sized private companies, mostly family businesses, Greek shipping has great flexibility and adaptability to changing economic environments and can, thus, readily respond to changing trade patterns and flows effectively and efficiently.

Greece remains on the UN IMO “List of confirmed Standards of Training, Certification and Watchkeeping for Seafarers (STCW) Parties” and on the White Lists of the Paris and the Tokyo Memorandum of Understanding, while it is one of the safest fleets worldwide with 0.43% of the fleet and 0.11% of total tonnage being involved in minor accidents.

The prospects for 2019 look relatively healthy. Both global GDP and global trade are expected to grow, albeit at a slower pace than 2018.

World seaborne trade is projected to expand at a compound annual growth rate of 3.8% between 2018 and 2023. The extensive demolition activity seen in 2018 will most probably not be repeated in 2019. However, trade disputes and shipping-related regulatory trends will continue to feed uncertainty in the shipping market.

Other geopolitical developments will also affect the shipping market’s outlook for the years to come: Brexit stands to disrupt seaborne trade flows in Northern Europe while, as China moves up the global value chain, transforming from the world’s factory to a consumption country, new trading opportunities are opening up for other South-East Asian countries. This in turn is expected to shift global trade patterns.